Multicultural Australia: you’re standing in it!

A small swag of human interest stories in today’s Sun-Herald in the wake of Australia Day say more about the comparative success of Australian multiculturalism — diversity AND cohesion — than a whole peck of moanings and mutterings on talk-back radio or similar venues. Aussie pride? Stories like this give it to me in heaps. May there be more and more of them. Let’s celebrate what we have with open hearts.

The first story is such a great contrast to the brief agony that was Cronulla 05. 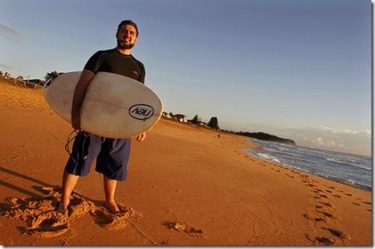 WHEN he’s in the line-up off Sydney’s popular beaches, Haisam Farache is just another surfer waiting for a wave.

But once he’s out of the water he swaps his wetsuit and surfboard for a robe and turban and assumes the role of an imam at Australia’s largest mosque.

“For me it relates to how I am as an Australian and a Muslim,” he said. “When I go to the beach I feel rejuvenated. I feel like a new person and whatever stresses I have in my life are being washed away with the waves.”

The 34-year-old, who began surfing at 11, said his pastime intrigued his students at the Lakemba Mosque. Most laughed, he said, when they discovered he was a surfer, and found it difficult to believe a religious leader had an interest outside teaching Islam.

The Auburn-based lawyer said surfing was also an ice-breaker when he visited schools across the country as part of his work with the Together for Humanity Foundation.

He recalls visiting a school on the northern beaches where many students began calling him a terrorist. Once the children discovered he was a surfer, their opinion changed and they saw him as one of “them”, he said.

The second story told about nine of the 3300+ from 56 countries who pledged their allegiance to the flag in ceremonies across NSW yesterday.

Of the 27,494 immigrants who arrived in NSW between January 1 and December 1 last year, one out of six was from China, making it one of the largest source of immigrants to the state.

Meanwhile, India has overtaken Britain as our second-biggest source of new citizens, followed by the Philippines, Vietnam, South Korea, Lebanon and Indonesia.

Pakistanis and Iraqis are also among our fastest-growing migrant groups…

—  Liliana Auwyang adored Australia when she visited as a tourist more than 10 years ago. It was the beautiful scenery and culture that had this 41-year-old from Panania, in south-western Sydney, hooked. So, not long after her return to Jakarta, she began researching how to come back permanently…

— Rania Islam. One of the newest little Australians was born at the Royal Hospital for Women, Randwick, yesterday. Rania Islam arrived at 2.40am, much to the delight of her parents, Sharmin Khan and Rezaul Islam, and her big brother Rayyan Islam, 18 months. “It’s very exciting,” Mr Islam said. “We are very proud.” Ms Khan and Mr Islam moved to Australia six years ago and became citizens last year.

— Douglas Snider. IT WAS true love that brought Douglas Snider to Sydney six years ago. His wife Tiate was born and bred in the inner-west suburb of Newtown. Now that he’s here, he wouldn’t swap it for the world. “I love absolutely everything here in Australia,” he says…

— THE first Australian park Ewi Sook Oh visited was dotted with coin-operated barbecues… “I love the Australian environment and way of life. I think it is God’s gift,” Ewi says. “In my home in South Korea there are tall buildings and crowds everywhere. There are not so many people in Sydney but they come from other countries everywhere and I feel it is a good opportunity for me to learn about their traditions and customs.”

— WHEN Anwar Hamam landed in Australia, he was merely chasing an opportunity to further his education… But like many of his fellow new Australians, Anwar settled permanently after meeting his partner here… “What I like about Australia is that it is very safe,” Anwar says. “It also offers me so much in freedoms and opportunities. I can become whoever I want to be here. There seems to be a lot more to do here than just about anywhere else.”

— A NATIVE of St Petersburg, Andrei Bobylev first heard about Australia from some friends who had already been, and he became curious.

Then he read the travel diary, Down Under, by best-selling American author Bill Bryson, and decided to follow suit. That was three years ago…

Posted by Neil on January 27, 2008 in Australian, equity/welfare, inspiration, multiculturalism

I wrote a very long post after the Virginia Tech shootings, reflecting on a range of cultural issues that are also relevant to Australia. While being in favour of gun control, I did not pursue that aspect much.

Korean-American Christian Hyepin Im has since posted on the God’s Politics site. She argues that Asian Americans have been starved of government support because they are seen as “model immigrants”.

There is no denying Seung-Hui Cho was one sick individual whose wild rampage was senseless and tragic. At the same time, I can’t help but mourn and wonder whether or not this tragedy could have been averted if Seung-Hui had early intervention. For too long, Asian American communities have been ignored or left out of policy, program, and funding decisions under the justification of being “model minorities.” Only recently, studies are acknowledging that monolingual Asians and their families are under-served in this country. Such short-sighted decisions are costing many innocent lives, and taking a huge toll on the community and the country. For example, juvenile delinquency for Asian Americans has increased while it has decreased for other groups in the last 20 years. Asian Americans suffer from high suicide, depression, and domestic violence rates.

A very informative post, and possibly relevant here in Sydney.

Comments Off on Interesting cultural policy take on Virginia Tech

Posted by Neil on May 13, 2007 in diversity, equity/welfare, multiculturalism

On welfare issues with Korean-Australian students

This post has become very long. Written over two days, it has four distinct sections.

— The first part is my immediate response to questions being asked about possible cultural factors in the tragedy that occurred at Virginia Tech. It should be noted that I do not aim to “explain” that tragedy.
— Then I present some other posts I have found that take up the same or similar questions. The most significant one comes from a Korean-American pastor.
— In the third section you may read further thoughts based on my own observation of Korean and Korean-Australian students in Australia.
— I conclude with reflections on the need to have a perspective shaped by something more than monoculturalism.