A student the other day made a series of mistakes in his writing, things like:

What is happening here is that the grammar of direct questions, the actual words someone would have said, is being mixed in with a report structure.

So our examples would become:

Reported questions are more common in rather formal registers, but they do quite frequently occur in narrative, partly for variety, and partly for focussing the narrative viewpoint in a certain way.

Many of the rules are just the same as in Indirect or Reported Speech.

Is “majority” singular or plural?

Once again the problem occurred as I was writing on my personal blog. The entry is about comment spam, and does mention this blog, so you may care to look: The joy of spam. The sentence: The majority lately, as in the other blogs, has been people with Greek names and sites with China endings… I have decided to make that have been.

I found this answer:

“Majority” is one of those words that can be either singular or plural. Common sense works pretty well in deciding which. If you mean the word to describe a collection of individuals, then the word should be treated as plural: “The majority of e-mail users are upset about the increase in spam.” If the word is used to describe a collective group, then consider it singular: “A 90% majority is opposed to scheduling the next meeting at 6:00 A.M.” If you are uncertain which you mean, then choose whatever form sounds best to you; it’s not likely to bother many people.

It is amazing how people still fuss over this, even though

Singular “their” etc., was an accepted part of the English language before the 18th-century grammarians started making arbitrary judgements as to what is “good English” and “bad English”, based on a kind of pseudo-“logic” deduced from the Latin language, that has nothing whatever to do with English.”

See Jane Austen and other famous authors violate what everyone learned in their English class and Singular “they”. So I let my sentence stand, though some would argue pluralising the sentence (1 above) would have been a better choice.

I am a deliberate practitioner of inclusive language, but not an extreme practitioner. I have seen cases which I regard as extreme. It is a remarkably contentious issue for some; I notice the Wikipedia entry Gender-neutral language in English is marked “The neutrality of this article is disputed”!

“Anyone who had a heart and knew their English would accept a bound singular ‘they’.” — Geoff Pullum, co-author with Rodney Huddleston of The Cambridge Grammar of the English Language.

“All this evidence from different quarters of the English-speaking world shows that singular use of they/them/their after indefinites is now well established in writing. . . . Language historians would note that the trend towards using they for both plural and singular is exactly what happened with you some centuries ago. . . . The trend is probably ‘irreversible’.” ( Pam Peters, The Cambridge Guide to English Usage [Cambridge: University Press, 2004], p. 538). — My choice as best current usage reference.

“It is likely that people will continue to choose from the existing variants rather than adopt a new pronoun and that they will increasingly become acceptable as the generic singular even in formal style” (Sidney Greenbaum, The Oxford English Grammar [Oxford: University Press, 1996], 20).

Last two quotations from “Singular” they in Modern English Stylebooks on a site devoted to Bible translation.

Good question: are fractions and decimals singular or plural?

Over on Old Teachers Never Die… a couple of weeks ago Antony Shen asked:

Speaking of “subject-verb agreement”. I hope you don’t mind answering me a simple question (not directly related). With countable nouns, in scientific styled sentences, do you say “0.1 apple” or “0.1 apples“? (as in zero point two rather than one fifth of an …) Also, in the case of negative numbers, do you say “-1 apple” or “-1 apples“? Or shall I ask, what is the definition of “plural”? “greater than one” OR “anything other than one”?

OK, with countable nouns: I would say 0.1 apples for grammatical reasons, though I agree it is not logical! I guess you could say 0.1 of an apple just as you say one-tenth of an apple, but it seems we don’t. Interesting question.

If the number one is used, whether it is +/-1, the following noun will be singular. So it would be -1 apple. We’re talking grammar, not logic; and yes we say zero apples, probably because zero is thought of as a number that is not one, even though zero is neither singular nor plural logically.

Thank you very much for the answer. In Mathematics (Number Theory), unity means 1 (one), and only the positive one, and there is only one unity. In grammar, it seems like there are two cases for singular nouns. If plural is defined as “any amount other than one”, then, zero is plural, as well as -1.

Unfortunately mathematical theory may have little correlation with grammar or usage. The concept of grammatical number is not a mathematical concept strictly, so the word one is always singular, whatever mathematical theory may hold. English probably treats zero as a plural because the grammar gives only two choices, and the word zero is not the word one: we also say, incidentally, there are no apples on the table (countable) but we say there is no rice on the table (uncountable). At least we don’t have to worry, as the French or the Italians do, whether apple, rice and table are masculine or feminine! And Chinese survives quite well without marking nouns as singular or plural, as I am sure you know.

Anyone want to contribute more ideas? I found it quite intriguing — but then perhaps I am strange…

In addition to the sites listed under “Writing” in my Links, here are a few good sites I have found recently.

Rhetorical functions in academic writing. You will find:

Each one is illustrated with real examples. Very good for upper secondary and tertiary students.

Writing for Academic Purposes is a comprehensive online text (in frames) from Using English for Academic Purposes: A Guide for Students in Higher Education by Andy Gillett, School of Combined Studies, University of Hertfordshire, Hatfield, UK. The parent site also addresses other aspects of EAP. Very good. Includes exercises.

Posted by Neil on May 3, 2007 in English grammar, English language, esl for students, esl for teachers, student help, writing

Joseph M Williams Style: Towards Clarity and Grace (U Chicago 1990) 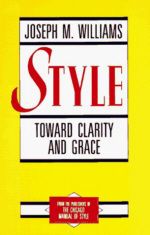 An oldie now, as you may see, and not all readers like it as the Amazon reader reviews under the pic above indicate. I have grown to like it a lot. For a start, it is very sensible on a topic that gets many a pair of knickers in a knot:

Now there is a lively debate about whether action and understanding have anything to do with each other, whether those who want to write clearly ought to study the principles of language at all. You may write well, yet you can’t distinguish a subject from a verb, or you may understand everything from retained subjects to the subjunctive pluperfect progressive, and still write badly. From this apparent contradiction many have concluded that we don’t have to understand principles of grammar to write well. Writing well, they believe, has to do with being sincere, or writing how they speak, or finding authentic voices, or just being born with the knack. Others devoutly believe that they learned to write well only because they studied Latin and diagrammed sentences beyond number.

The truth will disconcert both persuasions. Nostalgic anecdotes aside, the best evidence suggests that students who spend a lot of time studying grammar improve their writing not one bit. In fact, they seem to get worse. On the other hand, there is good evidence that mature writers can change the way they write once they grasp a principled way of thinking about language, but one that is rather different from the kind of grammar some of us may dimly remember mastering — or being mastered by…

END_OF_DOCUMENT_TOKEN_TO_BE_REPLACED

Comments Off on Joseph M Williams Style: Towards Clarity and Grace (U Chicago 1990)

I have a problem with tense when I use “if”. What am I doing wrong?

This is actually quite complicated, but I will give you the simplified version that is taught to people learning English as a second language. (Information adapted from A Basic English Grammar with Exercises by John Eastwood and Ronald Mackin, Oxford University Press 1988.)

When you use if you are usually starting a conditional clause — also called an adverbial clause of condition or an IF-clause. You do this to show cause and effect, or what MIGHT happen if something else happens. There are three main kinds of IF-clause:

1. Type 1: IF + simple present tense, then + will, can, may/might.
END_OF_DOCUMENT_TOKEN_TO_BE_REPLACED

My tenses are all over the place. How can I fix this?

This is a real problem for many students, especially those from language backgrounds where tense is not shown the same way it is in English (and even more so in other European languages, which is one reason that studying Latin, Greek, French or German can help your English by making you more aware of what happens in English.)
END_OF_DOCUMENT_TOKEN_TO_BE_REPLACED

Comments Off on My tenses are all over the place. How can I fix this?

I am a senior student. My English teacher says I am overusing the passive voice. Can you give me some ideas on this?

Here is a clear explanation of active and passive voice from Purdue University’s excellent OWL pages.

Here is a simple quiz on the subject.

Some of the problems caused by using the passive voice are described by The Guide to Grammar and Writing.

From Yale University comes this more advanced explanation of ineffective use of passive voice. Here is a brief extract:

Sentences in the passive voice do not inherently lead to deceitfulness, but it is much more difficult to evade hard truths when you write in the active voice. Avoid passive constructions whenever possible, since they are often vague. For example:

Public television can be perceived by some as boring. When its programs are viewed, they seem tedious and cannot be easily understood. The interest of a wide audience is not attracted. This narrowness of appeal is imputed to excessive intellectualism. How can this be supported by a so-called “public” network?

These unfortunate sentences should be rewritten: “Many viewers find public television boring because it is too intellectual, a questionable quality in a ‘public’ network.” Most of us have a natural desire to avoid straightforward assertions like this because they bring on us the burden of controversy. Good writers distinguish themselves by their willingness to accept that burden.

This article also explains legitimate use of the passive.

Comment has been turned off because of spam commenting. Please use the guest book.

Comments Off on Overusing the passive voice?